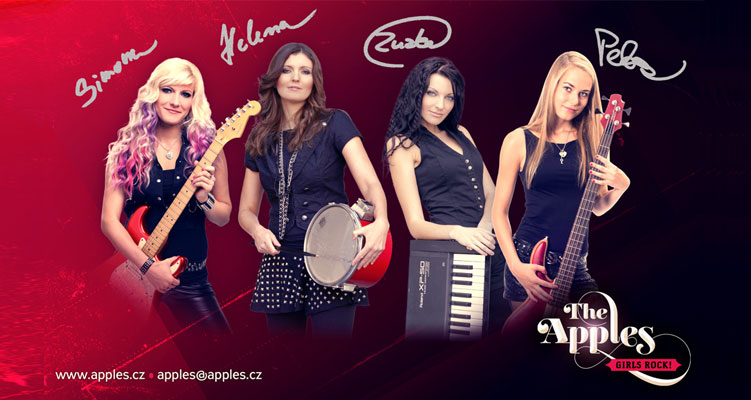 We have a treat for you today. I saw this band while perusing through YouTube videos. I was watching a snippet of Czechoslovakia’s Got Talent and was treated to a rock medley form these talented musicians. They were awesome in the on stage auditions and I had to contact them.

Gladly Helena wrote back and they agreed to be featured in article for us.

Below is their story.

We ripened on the apple tree in the fine weather of May, 1998. But the past 10 years of our existence haven’t taken our beauty away. Actually, quite the contrary! We are the girls you never miss. You can either enjoy our repertoire consisting of songs from the 60s and a couple of rock hits, or you can admire our original charts. We always have the same goal – to entertain you.

If you are curious and want to see us, the best thing to do is to visit the club Limonádový Joe (just next to the shopping centre Kotva) where we play each month. Or you might see us at a private party. See all the information on our web pages.

Our biggest achievements? During autumn 2006 we toured the U.S.A, we won an International song competition in Děčín 2001 with a song by Petr Janda (the leader of the band Olympic ) called „Tak řekni“! We opened the Christmas concert of Olympic in Lucerna in Prague, we played in several tv shows. The most unforgettable experience was the music show „Rozjezdy pro hvězdy,“ or the entertainment program called the „Abeceda hvězd“.

Below is a time line for the band.

1998 – 2016 – during this time they participated in many TV Shows and one of the few bands in Czech republic The Apples perform in more than one hundred concerts per year. These performances are organized by big companies for larger corporate events, city open air festivals and festivals.

They have performed in various countries including Italy, Austria, Poland, Germany, Slovakia and USA.

You can enjoy songs from the 60s – 90s such as The Beatles, Michael Jackson, Queen, AC DC, ZZ Top, Deep Purple or you can admire their original charts.

During the years the band has had personnel changes.