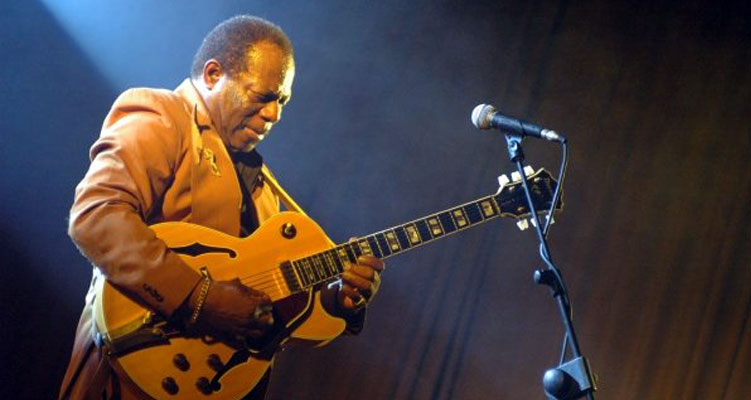 I don’t say this very often, but listening to the music of Emmett North Jr is like a spiritual experience. His music enters your ears, your brain, your heart and then into your very soul. I found myself so immersed in track after track and I didn’t want it to end. I wanted more the more I listened. His skill on the guitar and his catchy melodies leave you with a sense of awe. There must be a God to have create such a talented man. To not have experienced the talent, passion and perfection of this timeless human being would have been a crime.

Emmett has the ability to move the listener from being just an observer to a jubilant participant. His music is a testimony to an experienced, seasoned minstrel that reaches into your very soul and lights it up and leaves you changed for the better.

I bet you can tell I really like Emmett’s North Jr’s music…:-)

So, who is this maestro whose career spans decades and who has played alongside the best in recent musical history?

Emmett North Jr was born in Middletown, Ohio U.S.A. a small steel town of about 70,000 people; located twenty five miles from Dayton and twenty five from Cincinnati Ohio. When Emmett was about six or seven years of age, he would lay on the floor and watch “American Bandstand” with his uncle, becoming fascinated and Interested after seeing people like Chuck Berry, Little Richard ,James Brown, Jackie Wilson and many others. He somehow got started writing song poems when he was in the 5th grade. While using the other popular melodies of the day to sing along, but with his words. He became more interested in wanting to play the guitar instead of electric trains, so he asked for a guitar for Christmas.

His first guitar was a toy Western guitar made of cardboard, plastic and wood, but he didn’t have anyone to show him anything, so he lost interest. He was surrounded by musical people because his mother’s side of the family were singers and musicians. His mother sung in the gospel chorus and played piano/organ and it was the same for his aunts who sang in church and played piano and organ, his uncles played sax, trumpet and trombone and also sang in church and played instruments in school and the military. Emmett’s oldest sister played violin and his little brother sax but they didn’t continue playing. His father was from Georgia where his family moved for a couple of years. He estimates he was about nine years of age when he met a friend who introduced him to the guitar again where he learning to play.He can not recall his name but he re-introduced him to the guitar and he taught him a part of a song called “Honky Tonk” an old blues standard, featuring guitar. 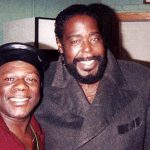 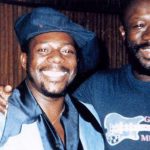 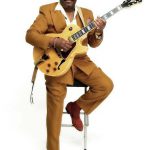 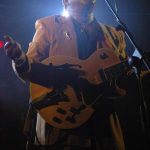 He moved back to Ohio to a larger city called Dayton, where there many musicians, R&B and Funk artists and places to perform; basically a good night life for entertainers and party goers at the time. While living in Dayton he became interested in the guitar again and took it more seriously. Having friends, their parents and family members who were singing and recording gospel got his creative juices flowing. He said he guessed it was in himself to become a musician/entertainer. He had a few lessons at age twelve and asked musicians to show him those different feels, riffs and licks on the guitar. He even learned things from pianists, organists, drummers and sax players. Some of his first gigs were playing at churches for pastors who wanted to hire him for their Sunday services. After seeing gospel groups perform with bass, guitar and drums he became hooked. Once he started getting his basic chords and rhythms together he started attracting attention from gospel groups and churches to play for them on Saturdays and Sundays. Most of the time they took up a collection for him.

He later started listening to other music like R&B, soul, jazz, blues and funk. He put together a band with friends. He started playing in bands and started getting more offers from his popularity around town. A band had come through Dayton looking for a guitarist for their band which was called Frank Cole and The Night Rockers who he learned was being booked by Otis Redding’s manager Phil Walden from Macon, Georgia. When the band arrived in Macon he left home during his Thanksgiving and Xmas holidays to travel and perform with them. The played in Muncie, Indiana, Lima, Ohio and on to Macon for a few months.

After returning back home in Dayton he started touring all over the Midwest with gospel groups and bands to cities like Louisville, Ky., Pittsburgh, Pa., Cleveland, Columbus and Cincinnati, Ohio, Chicago, Atlanta and Memphis just to list a few. He worked with another local band leader called Big Jay Bush and The House Rockers and that was probably more like his first real professional gig before Frank Cole and The Night Rockers. His first country gig was with local blues singer Piney Brown and his Swift Wind Band and later Piney Brown and ‘The Blues Toppers. 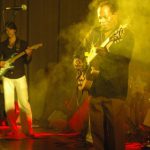 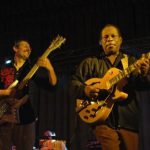 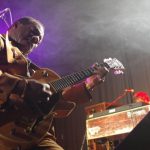 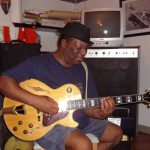 In 1974 he was asked to join the group Heat Wave by Keith Wilder’s brother Johnny Wilder who wanted to hire someone else from Dayton so Keith told him about Emmett but Emmett passed on it because he was afraid to travel over seas to London, UK. at the time. It still worked out good in the end because Emmett decided to move to LA the following year after his father kept egging him for years to go because he had some family living out here in California. He went to LA. in Feb. of 1975 to audition for soul singer Bobby Womack. Bobby’s PR man told Emmett about Barry White looking to hire a guitarist so Emmett went to Barry’s Office to check it out. Six weeks later Barry White hired Emmett to join his Love Unlimited Orchestra. Emmett wrote music, toured and recorded with Barry White from 1975 – 1979 and later worked with Barry White for another four years from 1986 – 1990.

Emmett worked in The Blues Brother movie where he met Isaac Hayes’ drummer Willie Hall whom Emmett had met three or four years earlier because Emmett had another friend named Boots who played guitar for Isaac in the mid seventies. Emmet recorded on soul singer Linda Clifford’s album I’m Yours which was collaborated on between Isaac Hayes and Curtis Mayfield where ‘Isaac arranged and composed the music and Curtis wrote the lyrics. The music was recorded in Atlanta at ‘Master Sound Studios’.

Emmett also visited with drummer Bohanon who use to record with Motown Records. While with Barry White Emmett toured Central and South America and Europe and was on TV in London, Paris, Germany, Mexico City. In America in Hollywood they performed The Merv Griffins Show, The Dinah Shores Show and The Pat Sajacs Show on CBS TV and the The Johnny Carson Show at NBC TV.

Emmett did live tours and recorded in London from 1981 – 1984. In London Emmett worked with reggae singing group Chosen Few then Clem Curtis and The Foundations and from 1988 to 98′ Emmett traveled and lived again in London and worked with friends writing and recording Emmett’s In The Zone smooth jazz cd which was written and recorded in London. It was released in June 1995 and debuted on Jazz FM radio and in September they debuted the album at London’s Jazz Cafe in Camden town.

There are other artist he has had the privilege to work on stage with in London like jamaican singers Barry Biggs and Denis Brown. When Emmett first moved to London in 1981 he was asked to do a session for a black female group at the Beatles’ Abbey Road Studios on Abbey road. In London Emmett got a chance to record a song called Nothing Looks The Same In The Dark written by singer George Michael and recorded with the group The Funkmasters band and produced by Tony Williams.

While living in Atlanta working with Isaac, Emmett played with the band at a record company party backing a singing group called Oddessy. While living in London Emmett also worked with a popular DJ/Producer called Tony Williams who had a reggae show on Radio London. Later he put together some musicians to do a session for a recording called It’s Over a song that went to the top of the British charts and soon was asked to appear on London’s famous Top of the Pops TV Show. Another TV show Emmett did while living in London was with Clem Curtis and the Foundations on a show called Unforgettable which catered to yesterdays hit groups. 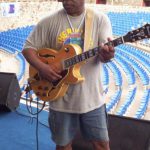 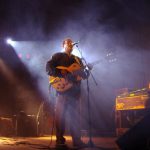 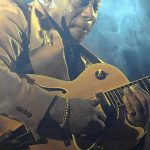 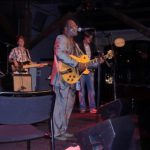 In 1982 Emmett met soul singer Marvin Gaye’s bass player while performing in London’s west end with The Foundations at at famous club called Guillivers and he turned Emmett on to a guy called Freddy Couseart from Belgium who was managing Marvin. They communicated by phone and fax for years from the eighties until the nineties about him getting Emmett work in Europe but they didn’t come together until years later in 1998 when he booked Emmett a show in Palermo, Sicily.He introduced Emmett to Pete Lamont and The Atlantic Soul Machine who had been around recording and touring for twenty years. They were to be Emmett’s backing band for the tour so they rehearsed and went to Palermo and had a successful show. After returning back to London the band asked Emmett to join them as a regular. Freddy signed Emmett as an artist. Tragically two months after their tour Freddy had a fatal bike accident in Belgium. Emmett recorded, toured and remained with the band until September 1999. They recorded an old school R&B Funk album called Black,White & Blue. They toured Belgium, Holland, Finland, the UK and Sicily.

There was a time Emmett went back home to Dayton, Ohio after his first Barry White stint. He got to join a group called The David Julian Experience an Italian guy with two female dancers and a four piece band that performed hotels and resorts. They traveled to places in the states Emmett had never been or seen like Fargo North Dakota, Syracuse, New York, Minnesota, then Canada to Lloyd-minster, Regina, Moose Jaw, Calgary, Leftbridge and some other cities.

George Benson’ has been one of Emmett’s biggest influences so his style is similar but Emmett had other influences as well like Wes Montgomery, Miles Davis, BB King, Quincy Jones and many others who play sax, drums, bass and keyboards.